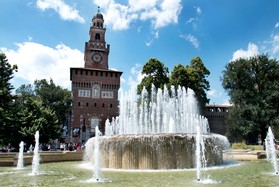 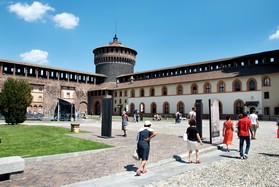 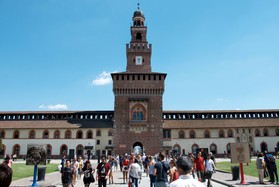 A bit of history of the Sforza Castle

Just outside the historical centre of Milan stands the Sforza Castle, a grand 15th-century fortification built on the ruins of a previous medieval fortress, commissioned by Francesco Sforza, Lord of the city at the time. Over the centuries, the Castle had many masters, as rulers that followed one another in the history of Milan before the Unification of Italy. Not only Milanese families like the Sforza, but also very important foreign governors, such as Emperor Charles V and Napoleon Bonaparte. Especially at the beginning of the 20th century, the Milanese had conflicting feelings towards the Castle. The reason was that over centuries it became the military base of invading armies that had attacked the citizens even firing from the towers of the fortress, as happened in 1848 during the rebellion of the Milanese against the Austrian Hapsburgs (the famous Five Days of Milan). In the end, it was decided not to destroy the building and to renovate it to the shape of the Sforza era. After further restoration after the bombings of the World War II, the Castle became the seat of the Modern Art Gallery (until 1920) and the School of Applied Engineering Art (until 1999). Afterwards, this bond with the artistic world hosted an Art Gallery, where you can admire paintings by prestigious painters, such as Tiepolo, Andrea Mantegna, Filippo Lippi, Canaletto, Bronzino, Tintoretto and many others.

What is the Sforza Castle today?

The Castle has not lost its importance for Milan. It has diversified its function, making it even more significant in the artistic and cultural panorama of the city. The complex now houses a beautiful Art Gallery, the Archaeological Museum (divided into Prehistoric Museum and Egyptian Museum), various exhibitions, libraries and archives. Moreover, the large space occupied by the fortress is also used for temporary exhibitions, courses, meetings and conferences. Finally, if, after so much immersion in art you need to rest a bit, the ancient Piazza d'Armi is now occupied by the Parco del Sempione, one of the largest green areas in Milan. Inside there is not only a great variety of flowers and plants but also a library and a delightful little lake.

Curiosities about the Sforza Castle

Did you know that you can also find traces of Leonardo da Vinci at Castello Sforzesco? Through careful research by the architect Luca Beltrami and the historian Paul Müller-Valde, it was discovered that Ludovico Maria Sforza, known as il Moro (the Moor), had written to Leonardo, his protégé, to ask him to fresco the Sala dell'Asse (Axis Hall). In 1893 a small part of the fresco on the ceiling of the Sala delle Asse was found, but subsequent restoration work (the last from 2013 onwards) has brought (and is still bringing) new fragments of the work to light.

Leonardo da Vinci is present also thanks to the prestigious Trivulziano Codex, kept in the homonymous Library inside the fortress. The Codex is a collection of Leonardo's writings and drawings, for a total of 51 papers dating back to the period 1478-1493. These bring together a series of "notes" by the Tuscan Genius and collect notes on engineering and architectural projects or still referring to war machines. Among the papers, you can also find some portraits in caricature form and even pages of lists of cultured words and Latinisms, which perhaps Leonardo used to improve his lexical knowledge.

Why visit the Sforza Castle?

The complex is one of the most beautiful fortified structures in Italy and one of the largest in Europe. Initially used as a military citadel, it has been transformed over time to adapt to the times (and the governors!) until it became one of the most prominent artistic and cultural spaces in Milan. The Castle offers a variety of services, activities and events that will surely satisfy your curiosity about a part of the city's history, from the first construction of the fortress to the present day. Moreover, you cannot miss the opportunity to observe live some of the most influential artists of the Italian painting tradition between the 15th and 19th century. And that's not all: the building also houses Michelangelo's last work, the Pietà Rondanini, left unfinished due to the death of the artist.

How can I visit the Sforza Castle

Returning towards the historic centre, you can pass by the beautiful La Scala Theatre Museum, which tells the story of the prestigious Theatre of the same name and collects objects related to the theatrical, classical and lyrical world.

Not far away, the Duomo stands with its beautiful stained glass windows and the prestigious Candoglia marble. After getting lost among the five wide naves that divide the interior of the cathedral, don't forget to take a walk "high up" to see the beautiful terraces and be even closer to the Madonnina (Virgen), which stands on the central spire as protecting the whole city and its inhabitants since 1774.

Don't forget other fundamental places to know the artistic history of the city, such as the Church of Santa Maria delle Grazie, where you can find Leonardo's Last Supper. Also, the Pinacoteca Ambrosiana, which awaits you with a painting collection that spans more than two centuries and allows you to admire works by Caravaggio, Botticelli, Titian and many others. 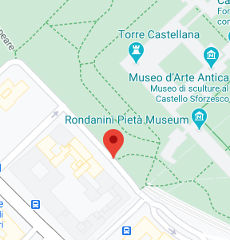