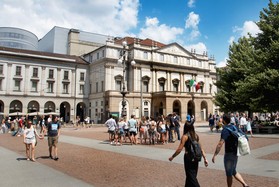 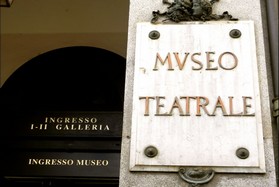 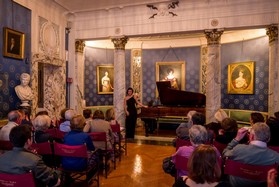 A bit of history of the Teatrale alla Scala Museum

The La Scala Theatre Museum is located next to the Teatro alla Scala and inside the Casa Ricordi, a building built in the 18th century to house the Palchettists, members of the noble families of Milan that had a reserved box sit in the theatre building. Later it was rented by the publisher Ricordi, whose publishing house was and still is specialized in music publications. However, in 1913 it became the seat of the Museo della Scala in Milan, the most prestigious theatre in Milan and the first popular theatre in the city. The Museum opened thanks to the acquisition of the Sambon collection consisting of objects related to the world of theatre. With a joint action, the Italian State and a group of 50 private citizens managed to collect the amount necessary for the purchase, and this is how the Museum was born. Inside, you can admire a beautiful and varied collection ranging from scenic sketches to paintings and sculptures with a musical theme, up to some ancient musical instruments. Part of the collection is also a bust of tenor and cellist Nicola Tacchinardi sculpted by Antonio Canova, one of the most influential artists of Italian Neoclassicism.

What is the Museo Teatrale alla Scala today?

The Museo Teatrale alla Scala is an extension of the adjacent theatre, which expands the theatrical experience beyond acting. It is not only an exhibition space but also a place of culture and education in general. There are, in fact, temporary exhibitions, workshops for children and public lectures.

Since its creation, the Museum has also housed the "Livia Simoni" Library, which initially had 10,000 volumes. Also, thanks to the donation of the Simoni family (after whom the Library is named), in the early 1950s the Library was enriched with another 54,000 volumes. In the following years, the donations of Ruggero Ruggeri and Arnaldo Fraccaroli made it possible to reach a total of more than 150,000 books. The oldest volume preserved in the Library is that of Plautus' comedies, printed in 1511 in Venice by Lazzaro Soardi.

On May 1, 1911, the antique dealer Jules Sambon decided to auction his collection. This was the occasion to implement a plan born a year earlier, when Ettore Modigliani (director of the Pinacoteca di Brera), the artist Lodovico Pogliaghi and Arrigo Boito (composer and librettist) had decided to create the Museum. But the road was uphill! Even the billionaire J.P. Morgan was interested in the Sambon collection. However, the U.S. tycoon decided to give up the competition, thanks also to a long deterrent work carried out by the group of artists and intellectuals who had raised the necessary funds for the purchase.

If you visit the Museum, you will find a room entirely dedicated to Giuseppe Verdi, who had a unique relationship with the Teatro alla Scala. It was here, in fact, that he began his career in 1839 with the opera Oberto, Count of San Bonifacio, making his talent as a composer known to the general public for the first time. From then on, his success was unstoppable and led him to compose immortal works such as Aida and Nabucco.

If you want to live a complete experience of Milan's theatre history and if you wish to understand the importance of the Museo Teatrale alla Scala for the city and all Italy, this is the right place. The Museum is rooted in the Lombard culture and also in the national one. It houses objects that are the symbol of a theatrical and musical art known and appreciated all over the world. You cannot miss the opportunity to admire the portraits of those who made the history of classical music and opera in Italy, such as Giacomo Puccini, Maria Callas, Renata Tebaldi, Arturo Toscanini and many others. If you still need another reason to visit the Museum, this one hosts a real collector's piece: In the first room, you will find the "grand coda" Steinway piano that belonged to the Hungarian composer Franz Liszt.

How can I visit the Museo Teatrale alla Scala?

To visit this beautiful cultural centre, you can buy the entrance ticket for the Museo Teatrale alla Scala + the Audio Guide of the city of Milan, a city with great cultural and entertainment offerings.

The centre of Milan is full of must-see places. Not far from the Museo Teatrale alla Scala is the imposing Duomo, another essential stop when you visit the city. The Cathedral awaits you with its precious marble and stained glass windows. And don't forget to take a walk on the roof terraces and look for the Madonnina, who watches over the whole city.

If art is your main interest, you cannot miss a visit to the Pinacoteca Ambrosiana, which houses works by Titian, Caravaggio, Raphael, Botticelli and many other personalities who made the history of painting between the 15th and 16th centuries. Moreover, you cannot miss a visit to Leonardo Da Vinci's Last Supper, housed in the Church of Santa Maria delle Grazie: Leonardo's masterpiece is considered one of the most important works of Italian Renaissance painting.

Another symbol of Milan is the Sforza Castle, built by order of Duke Francesco Sforza in the 15th century. Born as a military citadel, it is now the seat of exhibitions and cultural institutions and is also one of the largest castles in Europe. 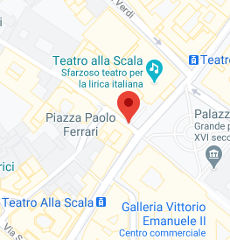