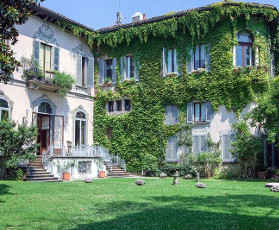 A bit of history about the Leonardo's Vineyard

The vineyard is located in the center of Milan at the opposite end of the garden of the Casa degli Atellani and was a gift from Ludovico il Moro to Leonardo in 1498. Ludovico Sforza, Duke of Milan, gave Leonardo a vineyard in his garden, which he called the vineyard of San Vittore.

Ludovico gave away two houses to the Atellani family, a courtly family of the Sforza. Ludovico had two dreams for the city of Milan; the first was to convert the Basilica of Santa Maria delle Grazie into a mausoleum of the Sforza family, and the second was to build a residential neighborhood for the most loyal followers such as the Atellani family and Leonardo. Casa degli Atellani is one of the few vestiges of this dream.

During the XX century the garden was transformed nevertheless it always maintained its original splendor.

This ticket DOESNT include the entrance to the Last Supper

What is the Leonardo's Vineyard nowadays?

On a few steps from the Last Supper, Leonardos Vineyard opens its doors to all visitors. Nowadays this vineyard is preserved intact maintaining its original vine and its possible to make a tour of the property through a guided visit, allowing to delve into the history of this magical place.

Curiosities about the Leonardo's Vineyard

Did you know that during the excavations of 2015, the type of vine variety that Leonardo cultivated was identified and expert winegrowers have worked very hard to reproduce the favorite wine of Leonardo Da Vinci thanks to several tests?

Why visit the Leonardo's Vineyard?

Live the Italian Renaissance as if it were today, go through the Atellani House where the ivy decorates and dresses the external walls as do the works of art and the sculptures inside.

Leonardo's vineyard will help you understand more of this symbol of the Renaissance, a universal genius, as well as philosopher and humanist with an infinite curiosity that can only be compared to his immense inventive capacity. Leonardo da Vinci has been considered one of the greatest painters of all time as well as being one of the artists with the greatest number of talents in the most different disciplines.

Just at a short distance from Leonardos Vineyard is located the church of Santa Maria delle Grazie which refectory houses one of Leonardos masterpieces The Last Supper. Once you recover your breath, observe the light and shadow effect. In addition, feels Leonardos genius with a perspective that enlarge the room.